The treatment of stroke on the island of Elba

The island of Elba is the main island of the Tuscan archipelago in the Tyrrhenian sea, 20 km from the Italian coast. This is a very popular international touristic destination. The island  has a resident population of 30,000 inhabitants that in the periods of maximum tourist flow can exceed 400,000 inhabitants. Such a challenge may be hard even for the most efficient health care systems. We met Dr. Angelo Testa head of the Emergency Team, comprising eight other Doctors and Neurologist Dr Elisabetta Bollani, who for some years has successfully implemented a stroke pathway that provides access to time-dependent diseases as well as thrombolysis iv and dispatchment for thrombectomy to mainland Tuscany hospitals.

1- What does it mean to be a senior first aid physician in the island of Elba?
It means to take care first of all of your community, this is my island I was born here, but also taking care of the thousands of tourists who crowd our beaches, and many ports. They practice special sports such as scuba diving or cycling, and therefore have very specific risk profiles compared to the case series of large hospital centers in Italian urban areas. In particular, we are equipped with a hyperbaric chamber that is operative to combat decompression sickness in the divers. The range of pathologies that the individual physician has to deal with is varied and multiform, embracing many specialties. Particularly fascinating was the challenge of stroke care. Because of the intrinsic difficulties of the treatment and the complexity of the dispatchment we had to implement with the Hospitals of the Continent.

2- Why did you decide to commit to the treatment of stroke?
Everything often happens a bit by accident, it was 2011 when a foreign guest was involved in a small road accident, at first it seemed like a speech problem in a drunk tourist, then after a more careful examination we reported a language disorder that was detected in time allowing an helicopter transport to Florence with a successful arterial procedure. Since then, thanks to my commitment and the staff of the entire hospital in Portoferraio, we have put in place a Cincinnati ambulance screening screening checklist, a specific triage checklist on arrival at the hospital and quick access to intravenous thrombolysis at the emergency ward. For high scores of NIHSS, TC angiography screening is guaranteed and possibly helicopter transport in hospitals equipped with Tuscany.

3- Have you achieved important goals in recent years?
The number of patients treated is modest but represents 10-12 percent of all ischemic stroke, which over the years does not exceed 80 cases per year. The presence on the island of many tourists coming from very evolved realities has made it necessary to implement this technique also for the request for access to specific care by this most demanding costumers. But it would be wrong to rest on our laurels. For this we have organized a regular training of first aid and also ambulance staff as well as awareness raising campaigns on the resident population. The use of telemedicine is the last frontier that will minimize the risk of futile helicopter transfers, although this is rather rare. 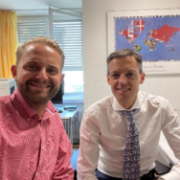 Adjustment For Confounders In stroke Research