Stroke is the second most common cause of death and the leading cause of long-term disability in Europe.1 Recurrent stroke is associated with physical disability, cognitive decline, mood disturbances and poor quality of life. However, early recurrent stroke can be reduced in up to 80% of cases with the implementation of optimal secondary prevention of stroke.2 Although all countries across Europe agree that appropriate secondary preventive measures are important, information is lacking regarding the provision of secondary prevention services in different countries.

Following the recent publication of the ESO/SAFE/ESMINT/EAN survey on provision of Acute Stroke Care across Europe,3 in this issue of the ESJ, the ESO-SAFE Secondary Prevention Survey Steering Group reported their results of a survey on the availability of secondary prevention services after stroke in Europe.

Methodology of this survey is similar to the previous survey on acute stroke care, where consensus responses were sought from panels of three experts in each country, coordinated by national stroke society chairs, or an ESO-nominated expert where there was no national society. National or local stroke registries were identified where possible and in the absence of such information, the coordinator and experts were asked to perform best estimates by consensus.

Of all 50 countries, data were available from 46 countries. 71% countries reported access to some registry data and 54% identified national strategies including secondary stroke prevention. Overall provision of secondary prevention varied between countries of different GDPs, with gaps in care prevalent particularly in lower income countries. Highlights of the results are listed below

The authors concluded that, “despite significant advances in secondary stroke prevention over the past decade, many gaps in the provision of routine, cost-effective, evidence-based interventions across Europe remain”. The gaps identified in this survey also echoed with the Action Plan for Stroke in Europe,4 which identified 4 targets for 2030 in the area of secondary prevention, including incorporating secondary prevention in national stroke plans, ensuring that at least 90% of the stroke population is seen by a stroke specialist, and ensuring access to key investigations as well as key preventative strategies.

So, for secondary prevention of stroke, there is still many to do but it is never too late!

The full paper can be found on the ESJ website. 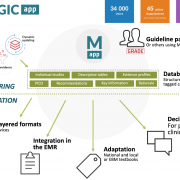