A preclinical study by Anfray et al., University of Caen,France  investigated the effects of single chain (sc) tPA versus two chain (tc) tPA. These forms are contained at variable rates in commercial tPA. Thrombolytic activity is equivalent but only sc-tPA displays excitotoxicity. However, sc-tPA was superior to tc-tPA in reducing lesion size and behavioral deficits after thromboembolic stroke in mice.

Several studies investigated the features of thrombi from ischemic stroke patients after endovascular treatment. Di Meglio et al, Inserm, Paris, analyzed 164 thrombi by immunohistology and 17 thrombi by scanning electron microscopy. They found common traits related to the composition with a red blood cell-rich core surrounded by a compact shell-like structure made of fibrin(ogen), vWF, platelets, and neutrophil extracellular traps, that could participate in thrombolysis resistance. In contrast, after studying 27 thrombi, Semerano et al., San Raffaele Hospital, Milan, Italy, reported macroscopic heterogeneity of thrombi in terms of consistence, dimensions, color and gross appearance, and the pattern of red blood cells, platelets, fibrin and vWF. Thrombus composition correlated with the density of the occluded vessel on CT scan. A large international consortium, the Curam and Mayo Clinic international acute ischemic stroke clot registry, presented results of a preliminary study with 50 patients. They found no correlation between the number of passes for clot retrieval or final TICI score with the suspected clot etiology and components. Again, they concluded that non-contrast CT may indicate histological characteristics of AIS clots.

Fani et al. from Erasmus MC in Rotterdam  reported results from the Rotterdam study where CBF was investigated in 5,289 persons (46-98y) free of stroke. Measures were associated with risk of stroke and TIA and markers of SVD, retinal vessel diameters and markers of large vessel disease. Lower total brain perfusion was associated with higher risk of stroke or TIA. However, indicators of failing autoregulation were only associated with TIA, which was suggestive of a different pathophysiology underlying TIA and stroke.

ESJ Comment: Outcome of pregnancies and deliveries before and after ischaemic stroke 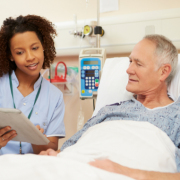 Join the MOVEment and Prevent Stroke!