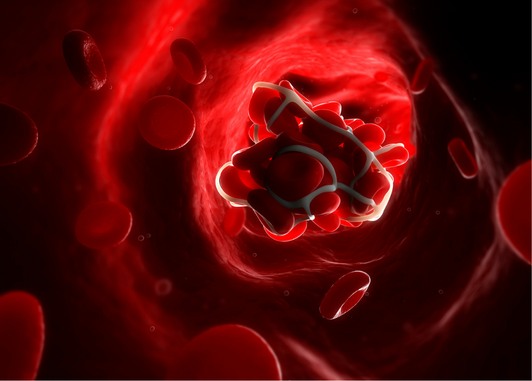 Even before becoming the standard of care in large-vessel occlusion ischemic stroke, mechanical thrombectomy has offered a potential insight into stroke etiology, by means of direct thrombus analysis.

Extracted thrombi were frequently classified as either erythrocyte-rich (or “red thrombi”), fibrin and platelet-rich (or “white thrombi) or mixed, as they appeared under light microscopy.1,2 One of the first studies aiming to predict thrombus composition based on initial imaging was the study conducted by Liebeskind et al., which found that thrombi presenting with a hyperdense MCA sign on plain CT or with a susceptibility vessel sign on susceptibility weighted-imaging MRI contained a significantly higher concentration of erythrocytes.1 This finding was confirmed by a more recent meta-analysis, demonstrating higher odds of erythrocyte-rich thrombi if a hyperdense artery sign was present.3

In a landmark study on over 1300 patients, the authors demonstrated a higher mean concentration of red blood cells in thrombi extracted from patients with large-artery atherosclerosis versus cardioembolic strokes. Fibrin and platelet concentrations were otherwise similar. The highest erythrocyte concentration was identified in thrombi resulting from vessel dissection. However, no definite threshold could be estimated on the ROC analysis for differentiating between the two main stroke etiologies.5

Regarding acute stroke treatment, recanalization rate seems to be associated with thrombus type. In a recent review,4 the authors conclude that erythrocyte-rich thrombi are associated with higher recanalization rates following endovascular treatment and intravenous thrombolysis, supposedly as a result of their increased sensitivity to tissue plasminogen activator. On the contrary, fibrin-rich thrombi are generally considered more refractory to acute treatment, because of their superior stiffness and adherence.

Lastly, thrombus composition varied dynamically with each thrombectomy pass. In a study conducted by Fitzgerald et al.2, per-pass analysis revealed that erythrocyte concentration was highest in earlier passes and decreased afterwards; moreover, platelet and fibrin concentration was higher in later passes. The latter might either reflect the superior adhesiveness of fibrin-rich thrombi (requiring a higher number of passes) or the preferential fragmentation of the thrombi along the interface between erythrocyte predominant areas and fibrin-rich areas.

In conclusion, while imaging may predict thrombus histology and recanalization success (in terms of “red” versus “white” clot), thrombus analysis by regular staining does not provide sufficient information to discern between large-artery atherosclerosis and cardioembolic stroke types. While initial thrombus composition might be specific to the site of formation, its persistence in the circulation, embolization and fragmentation will most likely alter its structure afterwards. This limitation might potentially be overcome by using more advanced analysis techniques in future studies.