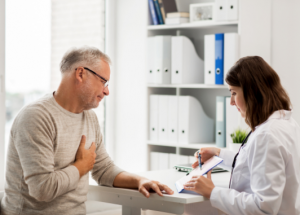 A case from the TIA clinic

It has been a long time since we last met.

I thought this is an interesting case to share with you.

A man in his late 50s was referred to the TIA clinic and complained of recurrent episodes of transient bilateral sensory disturbance for 2 months.

He described these episodes as sudden onset of numbness from head down to both arms lasting for only seconds. There was no trigger identified and was not position related. They could occur at random times without any warning and usually happen once every few days. There was no loss of consciousness, no speech or visual disturbance and no pain. Usually they were not associated with weakness but there was one occasion, after having a cluster of these sensory disturbances he also noticed left arm weakness lasting for approximately 15 minutes.

He has several vascular risk factors, including being an ex-smoker, history of hypertension and hyperlipidaemia.

On examination, his blood pressure was 160/70mmHg and he was in sinus rhythm. Neurological exam was unremarkable.

What are the possible differentials that have come into your mind? Seizures? Transient focal neurologic episodes? TIAs?

Bilateral sensory disturbance is listed as one of the key features for posterior circulation syndrome by the OCSP classification and this additional episode of arm weakness also raised suspicion of these events being vascular.1 Therefore he went on to have MRI brain, which didn’t show any acute infarct, cerebral microbleed or cortical superficial siderosis. However, the CT angiogram showed a tight stenosis of the intracranial segment of the dominant right vertebral artery.

Posterior circulation TIA due to large artery disease was diagnosed and he was subsequently treated with dual antiplatelet therapy (DAPT) and high dose statins. These transient sensory disturbance has since receded.

TIA and ischaemic stroke with vertebrobasilar (VB) artery stenosis is associated with high risk of recurrence. The risk is highest in those with intracranial VB stenosis, which our patient had, with the 90 day risk of stroke being 33.3%.2

Best medical therapy including DAPT for 90 days and high dose statin is at the moment the recommended approach for patients with intracranial stenosis.3 However, there is scarce data on whether dual antiplatelet therapy should go beyond 90 days. Post hoc exploratory analysis from SAMMPRIS suggested that there might be a signal of benefit for DAPT beyond 90 days without any obvious signal of increased major bleeding.4

The role of stenting in treating VB stenosis overall has also been long debated. Pooled results from three randomised controlled trials (VIST, VAST and SAMMPRIS) found no evidence of benefit of stenting for intracranial stenosis compared to best medical treatment alone, partly due to the high procedural stroke risk. Although stenting for extracranial stenosis might be beneficial, further larger trials are required to determine the treatment effect in this subgroup.5 New imaging markers such as distal flow status might also serve as a useful tool in identifying high-risk patients who might benefit from more aggressive management.6