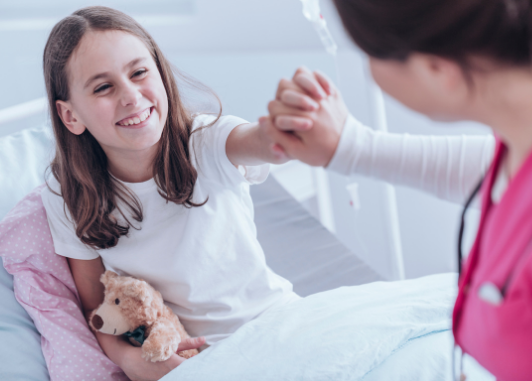 In this new era of stroke treatment, treating children with acute ischemic stroke has gained renewed attention. Even though arterial ischemic stroke during childhood is rare and children have an overall better prognosis thanks to their brain plasticity, the mortality of pediatric stroke is still 10% and the majority of children experience lifelong disability.1, 2 Compared with the adult stroke population, children with acute stroke are often misdiagnosed or their diagnosis is delayed.3, 4 Neurological deficits might be challenging to identify in young children as symptoms are often non-specific and strokes are frequently accompanied by seizures.5 Although ischemic strokes during childhood are oftentimes caused by focal cerebral arteriopathy, large vessel occlusion (LVO) can also be the underlying cause and these children have a significantly worse outcome when the LVO is left untreated.6

Acute ischemic stroke during childhood has been treated with intravenous tPA based on its efficacy and safety profile in adult stroke patients. In 2010, the Thrombolysis in Pediatric Stroke (TIPS) trial, a multi-center international prospective treatment trial designed to assess safety and optimal tPA dose, was initiated in the United States and Canada.7 Unfortunately, however, this trial was terminated in 2013 for lack of recruitment. Last year, observational data of intravenous tPA given in 26 children (age 1-17 years, median 14 years) were published. This study showed that, although two children developed epistaxis, no children developed a symptomatic intracerebral hemorrhage after intravenous tPA.8 Despite these promising data, the efficacy and the optimal dose of intravenous tPA in children still remain unclear.

Besides intravenous tPA, endovascular treatment (EVT) has also been proposed as a treatment option for children with LVO. Evidence is scarce and inevitably from selected cohorts but the results seem encouraging. A recently published, observational cohort study reported the experience of treating 73 children (age 8 months – 18 years old, median 11 years) with LVO in stroke centers across Europe and the United States. Recanalization was technically successful in 87%. There were no periprocedural complications other than transient vasospasm occurring in four children. Postinterventional complications included malignant infarction followed by a decompressive hemicraniectomy in three children and symptomatic intracerebral hemorrhage in one child. The authors concluded that the safety profile of EVT in children is similar to the safety profile in clinical trials for EVT in adults.9 Another recent study describes nine children (age 13 months – 16 years, median 14 years) who were treated with EVT at stroke intervention centers in the Netherlands. Four children had end-stage heart failure and a left ventricular assist device. In eight children, the EVT was technically successful. No major periprocedural complications occurred. In the 24 hours after EVT, three children recovered completely and four children recovered partly. Long-term clinical outcome was poor for all four children with a left ventricular assist device: two died from recurrent strokes, one from intracerebral hemorrhage, and one died from other complications. The five surviving children all had a favorable outcome after six months follow-up.10 These studies suggest that EVT in children with LVO is feasible and an important treatment option, especially considering their often delayed diagnosis. Many challenges remain, however, including determining a relevant mismatch on cerebral perfusion imaging and complications in children with congenital heart disease.11

Despite earlier challenges, the pediatric stroke community has continued with efforts to establish safety of pediatric stroke treatment. The recently founded International Pediatric Stroke Organization (IPSO) aims to address these ongoing challenges and guide recommendations. Because starting a new randomized trial in children with acute ischemic stroke does not seem realistic with the existing level of evidence in adult stroke patients, future guideline recommendations will most likely be based on expert opinions and clinical experience from the international pediatric stroke community.