A 27-year-old man was admitted with left hemiparesis, dysarthria and neglect (NIHSS 13) 40 minutes after symptom onset. He was a smoker with no other comorbidities or prior medications. Initial non-contrast CT showed no ischemia or intracranial hemorrhage and patient received thrombolysis 12 minutes after admission. However, in CT angiography we saw a right-sided tandem occlusion with no signs of dissection.

In addition, mechanical thrombectomy was successfully performed, with complete recanalization (TICI 3) 115 minutes after symptom onset. There were no acute complications and patient was transferred to our Stroke Unit. 24 hours control MRI demonstrated quite a large ischemic lesion in the MCA area, but in MR angiograpy all arteries were still open. At this point, he still had tactile and visual neglect, but left hemiparesis was milder (NIHSS 7).

During hospitalization, the patient underwent an extensive work-up, including cardiac CT (no thrombus), screening for deep venous thrombosis (normal), and ECG monitoring (no arrhythmias). Furthermore, tests for vasculitis, were also unremarkable, and intracardiac shunts was excluded after TCD bubble test, transthoracic and transesofageal echocardiogram.

Control CT was performed immediately after second thrombectomy, showing extensive edema, hemorrhagic transformation/extravasation of contrast, and 11mm midline shift. He was somnolent and after careful evaluation transferred for hemicraniectomy.

After 90 days he was still in active rehabilitation, but already spending weekends at home (mRS 3). We were not able to identify the aetiology of the stroke and he was discharged with a cryptogenic stroke diagnosis.1,2

A recent brief review of the literature by Fandler et al found only three publications on repeated mechanical thrombectomy within a short time frame.3 Two of these were single case reports and one case series. In total, eight cases with repeated thrombectomy within 14 days had been reported to date. Moreover, in half of the cases re-occlusion was in the same vessel and in half large vessel occlusion had reoccurred contralaterally. Cardioembolism was the most common stroke etiology. Despite of successful recanalization in all cases, outcome varied notably (90-day mRS 0-2 in 5 cases and mRS 6 in 3 cases). Thus, larger studies are needed to demonstrate the feasibility and safety of repeated thrombectomy in early recurrent large artery occlusion. 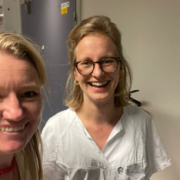 Cell therapy after ischemic stroke in the thrombectomy era?

Controversies in Stroke I