The second session of the Garmisch Stroke Science Workshop’s Friday focused on acute stroke treatments, brushing over frontiers like minor stroke, neuroprotection, distal or medium vessel occlusions, and basilar artery stroke. It seems like both the audience and speakers as well as the conference organization fully and easily adjusted to the pivoted conference format: the presentations were engaging and the discussion lively, led by the session hosts Anke Wouters and Daniel Strbian.

“It is impossible to cure a severe attack of apoplexy, and difficult to cure a mild one.” said Prof. Urs Fischer, quoting Hippokrates. In his keynote lecture on strategies to improve reperfusion in acute ischemic stroke he discussed medium or distal vessel occlusion stroke (MeVO: M2, A1, P1, and beyond). MeVO stroke has a variable neurological deficit due to the heterogeneity in supplied territory, and is now treated infrequently with endovascular treatment (EVT). Multiple randomized clinical trials on EVT in MeVO stroke are currently underway, including the Swiss DISTAL trial, American DISTALS (not to be confused with the former), Canadian ESCAPE-MeVO, and Asian FRONTIER trial. Collaboration between trial teams will likely be fruitful – and needed.

In addition, prof. Fischer discussed options for thrombolysis. In a study-level pooling of the direct-to-EVT trials, bridging intravenous thrombolysis (IVT) was associated with improved reperfusion rates – although no difference was found in functional outcome. Perhaps alternative agents or administration routes could optimize reperfusion and outcomes. Intra-arterial thrombolytics have been studied in the PROACT I, II, and MELT trials (urokinase). The CHOICE trial recently included its last patient (alteplase). The TECNO trial will study intra-arterial tenecteplase for non-complete endovascular reperfusion. Doors seem to be opened to the search of the most effective use of thrombolytics in support of EVT.

The second speaker and co-host, dr. Daniel Strbian, went into treatment of basilar artery occlusions. For this patient group with generally poor outcome, hopes were high for EVT until the BEST and BASICS trial results became known. Recruitment was slow in these trials, with many patients treated outside of the trial. Both trials showed equivocal benefit between the modalities regarding 90-day functional outcome despite higher vessel patency rates in the EVT arms. Only 30% of patients in the standard treatment arm received IVT in BEST, so the comparison was not even. In BASICS, this was 80%. Dr. Strbian also outlined high recanalization rates after IVT in basilar artery occlusion. He concluded that IVT remains an efficient treatment for basilar artery occlusion, EVT can be used as a rescue procedure in case of severe or deteriorating stroke, and doing trials is difficult but may be needed.

Third, prof. Philip Bath gave an overview talk on treatment of brain edema. The only currently proven treatment is decompressive surgery, but there may be pharmacological alternatives such as glibenclamide. There’s also the ethics to consider, though: what to think of the chance to shift patients from mRS 6 to 4 or 5?

The final presentation was given by prof. Carlos Molina. Connecting well to the keynote lecture, prof. Molina emphasized the lack of evidence on EVT for minor strokes. Even with an mRS of 0, patients can be substantially burdened by tiredness, depression, or difficulty to focus. So, what exactly is non-disabling stroke – does it even exist? The presentation’s take-home message was a clear “just treat – or include in clinical trials”.

The session was closed with a lively discussion. Participants from all ages and places joined in, up to and including the Scottish Highlands. While some of the year’s first snow is falling in Munich, it is encouraging to see that be it real-life or virtual, the stroke research community will continue to exchange ideas and spark interests and collaborations. Thank you all for joining, and see you at the next session! 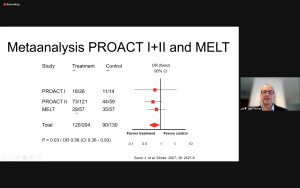 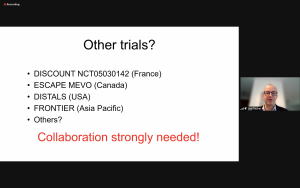 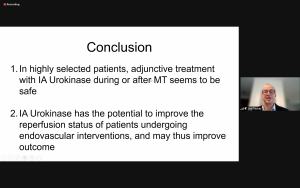 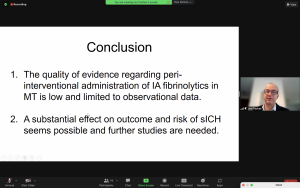 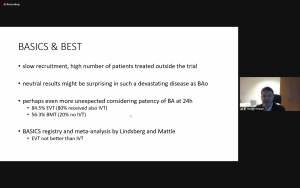 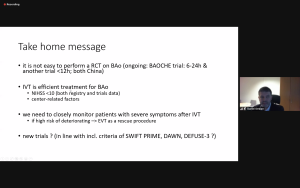 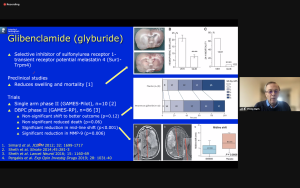 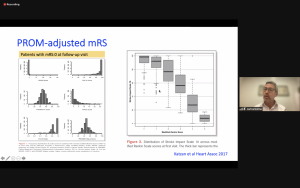 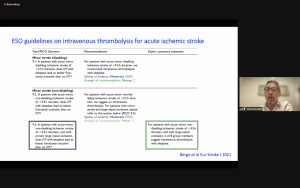