ESOC 2022 Session Report – EAN-ESO Joint Symposium: The vascular side of neurodegeneration: a preclinical and clinical perspective

Changes to the Blood-Brain-Barrier in Alzheimer’s disease

There is a very dense network of small vessels in the brain, called “capillaries”, which represent 85% of the total vasculature of the brain. If you put all the capillaries which represent the brain in a row, they will be 600 km in length. One capillary usually provides the circulation for one neuron. Small capillaries, which are branching from the arteries, are surrounded with pericytes, which play a significant role: they maintain the integrity of the brain-blood barrier. The artery, branching capillaries and pericytes is a very complex neurovascular unit. Pericytes are also consisting of the different subtypes: prearterial, thin and postcapillary venule pericytes, which are having different functions.

There are a lot of papers showing that vascular dysfunction can lead to neurodegeneration and cognitive decline. Postmortem brain tissue analyses showed blood-derived molecules leaking out into extravascular space (e.g., fibrinogen), the extravascular deposits were found, pericyte coverage). New biofluid biomarkers – 1 Qaib, 1 sPDGFRB (a marker of the pericyte damage) are discovered. Neuroimaging methods are used to measure brain-blood barrier BBB, CBF, microbleeds, WML. One of the neuroimaging methods, dynamic contrast enhanced MRI to investigate subtle BBB dysfunction. After the gadolinium contrast injection, the patient’s brain is analyzed in a special color-coding MRI to measure the blood leaking fluids into the brain tissue. Increased BBB leakage was found in the hippocampus, a region critical for learning and memory, during normal aging. It worsens with mild cognitive impairment and correlates with injury to BBB-associated pericytes (Montagne et al. Neuron 2015).

In another paper Axel Montagne and his team looked at the correlation of the BBB Integrity and the presence of the APOE4 which is the major genetic risk factor for AD. Presence of APOE4 allele leads to brain-blood barrier dysfunction. Brain capillary breakdown initiates WM dysfunction, which can be reversed by limiting fibrinogen extravascular deposits. It has implications for the pathogenesis and treatment of human WM disease associated with AD and small vessels disease dementia (Montagne et al. Nat Med 2018). Leaking fibrinogen to the extravascular space is toxic to the brain.

Imaging vascular function in neurodegeneration in the human – what does it tell us?

In his talk Simon Duchesne aimed to answer the following questions: 1) imaging: can we image small vessel disease disease (SVD) reliably in vivo, 2) vascular dysfunction: can we measure all presentations and 3) neurodegeneration: is it informative with respect to cognition?

The precision of the brain atrophy measurement could depend on the make and model of the measuring devices used, reaching 10% differences in total brain volume across sites. To solve this issue Simon Duchesne gave the example of the developed “The Canadian Dementia Imaging Protocol:

Harmonizing National Cohorts” under his coordination (2). The advantage of this protocol is that it developed in such a way that images could look the same within different imaging manufacturers and across different vendors.

In the Canadian Consortium on Neurodegeneration in aging ongoing study there are 976 participants already enrolled from normal cognition till all the variants of the cognitive impairment based on the brain atrophy and the study will display the correlation of the images with phenotypes of the diseases leading to dementia.

In the paper “White matter hyperintensities may be an early marker for age-related cognitive decline” by Cassandra Morrison with a team examined the association between small vessel disease (CSVD), amyloid, and pTau with a collaborative influence on cognitive decline in cognitively normal older adults without subjective cognitive decline (3). In results they highlighted that “only baseline WMH load is associated with follow-up executive functioning, indicating that it may be one of the earliest pathologies that contributes to future cognitive decline”.

In his conclusion Simon Duchesne underlined that it is recommended to use the united imaging protocol when diagnosing SVD, make it harmonized, and use as many biomarkers as you can. SVD should be strongly monitored and neuroimaging should be done in vivo as it has a large impact on the future cognitive decline.

Tissue type plasminogen activator (tPA), a fibrinolytic, produced by our brains during stroke is activated by endothelial cells and is released in the blood flow to participate in the thrombus dilution, activating the plasminogen into the plasmine which leads to recanalisation and to the reperfusion of the tissue. The less known fact is that tPA is produced by neurons, which can store tPA in synaptic vesicles and during the repolarization neurons can release tPA into the synaptic cleft and when tPA reaches the cleft, it can interact with the glutamate and NMDA-receptors and improve neuroplasticity. But overactivation of the NMDA- receptors in stroke can provoke the neurotoxic effects of tPA. In his lab, Denis Vivien with his team developed the several molecules, the fist one is “a tPA, which can not bind to NMDA-receptors” and the second one is the monoclonal antibody Glunomab which can block the tPA binding to the NMDA-receptors. So future directions for the stroke treatment is not only using the alteplase which is already proven medication in combination with thrombectomy, but also using so called “cocktails” with N-acetylcysteine to prevent the secondary formation of the thrombi and the Glunomab to reduce the neurotoxic effects of tPA.

Whether dementia is really preventable? With this question William Whiteley opened his talk. What is optimistic, is that dementia incidence has been falling by 13% each decade since 1998. Dementia prevention, intervention, and care: 2020 report of the Lancet Commission suggests that ca. 40% of dementia cases are preventable, but estimated population attributable risk from vascular factors is small:

Causality of many risk factors is still unclear. Limitations to observational dementia epidemiology consist of confounding (education and socioeconomic status; APOE E4: elevated LDL cholesterol, reduced obesity, reduced diabetes), loss to follow up (If biased to high level of risk factors and no dementia), the measurement error (diet; blood pressure) and reverse causality. If we look at the observational prospective studies linking increased BMI with the development of dementia, then we see that studies which lasted not more than 5-7 years did not demonstrate enough casualty and the studies which followed patients over 15 years demonstrated the increasing the dementia rates over time in subjects whose BMI was > 25 and this casualty seems to be true.

According to some studies (4), there is a steep correlation between elevated blood pressure and the risk of dementia, but significant in the young age, while in older age there is no such an association and the similar findings were displayed with a stroke as an outcome, though Hughes with a team demonstrated in the metaanalysis that for blood pressure lowering RR is 0.87 (95%C| 0.78, 0.97) for dementia prevention.

There are no significant changes while using statins on the long-term dementia prevention and REWIND study of diabetes control showed HR: 0.86; 95%Cl: 0.79, 0.95 for the GLP-1 (dulaglutide) with the outcome as significant cognitive impairment.

There is no strong association between genetic vascular risk-factors and the development of dementia ( meta-analysis from Edinburg researchers).

In conclusion William Whiteley underlined that “if new evidence is needed for population-wide dementia prevention, then new large trials are necessary. They need to have:

At the beginning of his talk, Martin Lauritzen mentioned that vascular signals are the basis for functional neuroimaging and vascular pathology is cause & effect of secondary damage in strokes. On the example of mother and child bonding and examined with MRI, Prof. Lauritzen brought the information that for the bonding process active nerve cells release neurotransmitters, astrocytes release vasodilators from endfeet and mural cells on arterioles and capillaries dilate. One of the significant roles in the neurotransmission plays the sphincter from penetrating arteriole to the cortex. The so called “microvascular inflow tract” plays a significant role and consists of the penetrating arteriole, the sphincter and the pericytes on the capillaries wall, and this microvascular inflow tract controls the vascular blood flow and the can reflect on the images supply.

In MCAO, mice models of the middle cerebral artery occlusion, the weaker signal from capillaries, thicker anastomosis but other large vessels which appear thinner were found, which is speculated to be “a postischemic microvascular vasoconstriction”.

In summary Martin Lauritzen underlined that: 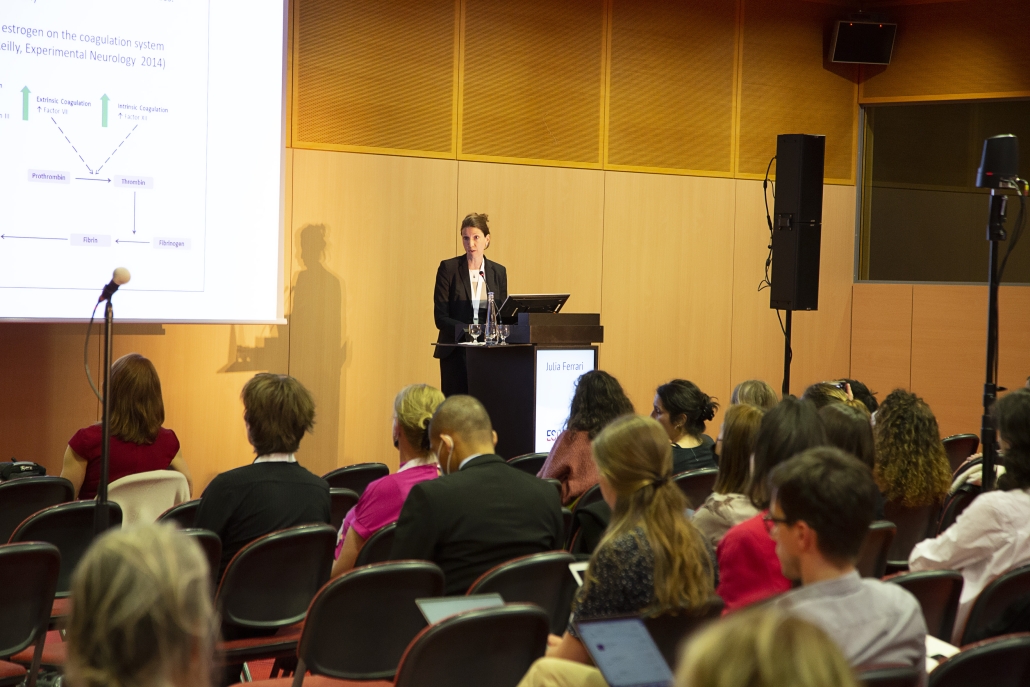 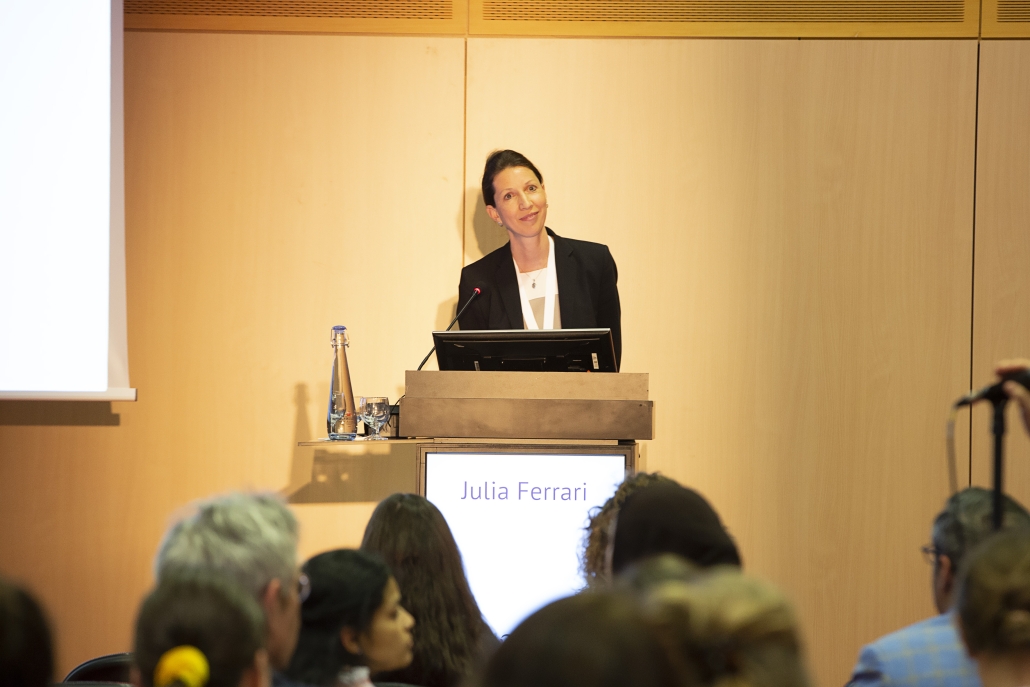