In 2015 European Stroke Organisation (ESO) launched the ESO EAST (European Stroke Organisation – Enhancing and Accelerating Stroke Treatment) Project. The aim of this project was to facilitate the implementation of new proven approaches in stroke diagnostics, management and treatment. ESO EAST Project includes not only countries from Eastern Europe (Estonia, Lithuania, Latvia, Slovenia, Czech Republic, etc.), but also countries from CIS and Central Asia: Georgia, Armenia, Kyrgyzstan, Kazakhstan and Uzbekistan. It is well known that the approaches for stroke management are different in Eastern European and Central Asian countries compared to the rest of Europe, not only in terms of  the availability of internal resources for the establishments of stroke unit care but also the implementation of established acute stroke treatment. In some member countries of the ESO EAST Project, the thrombolytic therapy in ischemic stroke is not yet implemented, or if started, the pathway still requires reorganization so that the service can improve from single cases to more of a routine.

ESO EAST is the first project which united all mentioned countries in one aim: to provide stroke patients an equal access to evidence-based stroke care.

Before implementing and bringing changes in a country’s healthcare it’s always crucially important to analyze the current situation and needs of the stroke physicians, hospitals and governments. Establishing the united stroke quality monitoring was an important milestone for the ESO EAST Project. The monitoring of stroke care quality systems became possible with the implementation in ESO EAST member countries of the Registry of Stroke Care Quality (RES-Q) which has free access, is user-friendly and not time consuming. In parallel, RES-Q includes important parameters such as “door-to-needle time” and “door-to-groin time”, and use of antiplatelets, oral anticoagulants as preventive measures, during the hospital stay and after discharge, which can reflect the country’s situation in stroke management and show the fields that requires improvements.

Consultants from an independent organization, Angels Initiative, are providing educational and funding support to member countries to practically facilitate implementation of changes. With the help of Angels Initiative, thousands of nurses, physicians, students, residents and healthcare specialists already received the access to online modules, BODYINTERACT cases with an electronic stroke patient treatment, The Angels WOW CT Training and many others.

Kyrgyzstan joined ESO EAST Project in 2015, RES-Q – in 2016 and Angels Initiative Project – in 2017. Dr.Inna Lutsenko has been coordinating the Kyrgyz branch of ESO EAST since 2015. Since then 15 doctors and volunteers have been trained on “Train the trainer” led by Angels Initiative in Germany. Dr.Lutsenko’s team trained 12 stroke departments (90 physicians) and 10 stroke departments were included in the RES-Q registry. Kyrgyzstan team presented the RES-Q findings on the annual ESO EAST workshops and during ESO conferences. We implemented for population an official first stroke recognition algorhythm “СОККУ”, Kyrgyz analogue of FAST, supported by Ministry of Health and since November 2019 we introduced the Evidence-based Algorithms and Scales for Acute Stroke Diagnosis at the Emergency Medicine Center in Bishkek.

Kyrgyzstan is an example how, with the thorough guidance of the ESO EAST Steering Committee, one can take the first steps to implement the best and evidence practices by starting from the education of the general population, emergency centers personnel and working with the efficient RES-Q registry.

You can read more about the ESO EAST activities in a recent paper by Robert Mikulik et al Enhancing and accelerating stroke treatment in Eastern European region: Methods and achievement of the ESO EAST program, First Published January 20, 2020 at European Stroke Journal. 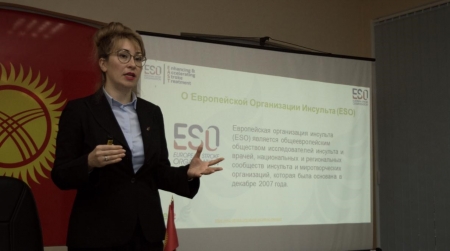 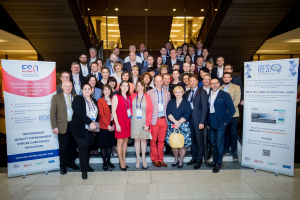 Likely increase in the risk of death or disability from stroke during the COVID-19...
Scroll to top