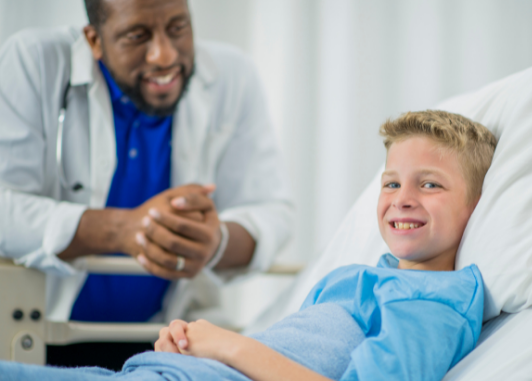 After publication of the landmark randomised clinical trials in 2015, mechanical thrombectomy has become standard of care for large vessel occlusion stroke in adults.1 However, children were excluded or underrepresented in all these trials and due to the different causes of childhood arterial ischaemic stroke and the smaller anatomy of the child’s vasculature, the results in adults cannot be extrapolated to the paediatric population.

Recently, after several case series and meta-analyses,2,3 the Save ChildS Study provided multicentre evidence for the use of mechanical thrombectomy in children with large vessel occlusion arterial ischaemic stroke.4 In that study, rates of recanalization and adverse events were similar to those seen in the large randomised controlled trials in adults, and the children’s neurological outcomes were generally favourable. However, definitive conclusions could not be drawn given the limitations of the Save ChildS Study, which include the retrospective design and the absence of a control group of patients with large vessel occlusion not treated by mechanical thrombectomy.

Regarding the use of mechanical thrombectomy in children beyond 6 hours from symptom onset, a secondary analysis of the Save ChildS Study provided evidence that thrombectomy can be safe even within a timeframe of up to 24 hours after onset of symptoms, when selected by a mismatch between clinical deficit and infarct.5 In this analysis, outcomes were similar to those in children treated in the Save ChildS Study with an onset of less than 6 hours and were better than those of adult patients in the DAWN and DEFUSE 3 trials.6,7

Another important concern is the size of the affected intra- and extracranial vessels, which can be much smaller than in adult patients. Although there is no specific armamentarium designed for use in children, small-scaled endovascular devices such as stent retrievers can be used within the brain vasculature of small children. However, paediatric vasculopathy is usually not due to atherosclerosis and can involve substantial inflammation, such as in focal cerebral arteriopathy, which presents a different vulnerability towards mechanical manipulation. Thus, for arteriopathies including focal cerebral arteriopathy, moyamoya vasculopathy, and dissection (which are present in about half of childhood arterial ischaemic stroke cases), mechanical thrombectomy can carry an increased risk of injuring an inflamed vessel, expanding an existing dissection, or vasospasm. However, another secondary analysis of the Save ChildS Study including 14 children with arteriopathies observed no dissections or vessel ruptures, but there might have been a selection bias against children with suspected inflammatory arteriopathies, which is underlined by the lower proportion of arteriopathies in the Save ChildS study than in population-based studies.8

Another important question is, whether there is a lower age limit for children to have thrombectomy?9 The most systematic evidence for this question again arises from the results of the Save ChildS Study, in which an analysis grouped by age suggested that the outcome was slightly worse in children aged 0–6 years than in the whole study cohort.8 However, although one might think this finding could be attributed to the selection of thrombectomy devices and size of the catheterised arteries, the same post-hoc analysis showed that neurological outcomes were not associated with any specific device selection.8

The exemplary failure of the prospective randomized Thrombolysis in Pediatric Stroke (TIPS) trial to assess the safety of intravenous tissue-type plasminogen activator in paediatric patients—owing to a recruitment shortage—underlines the challenges both of randomly assigning children with stroke and of studying paediatric stroke in randomised trials.10 Hence, the best possible way to generate higher level evidence for the use of mechanical thrombectomy and to define selection criteria in children, seems to be the implementation of prospective registries, such as the Save ChildS Pro Registry currently underway.11

Are you interested in learning more about Young stroke? Join the ESO Educational Webinar on 9 February at 18:30 CET.