The primary aim of the 7th ESO ESMINT ESNR Stroke Winter School was bringing together European stroke physicians and neurointerventionalists in order to enhance interdisciplinary management of patients with acute ischaemic stroke.

The 34 speakers (12 from EU, 20 from Switzerland and one from Vietnam and USA) including neurologists, interventional and non-interventional neuroradiologists, neurosurgeons, and neuropediatricians led challenging discussions. The teaching program included 33 lectures and 4-6 tutorials. The focus of the lectures was interdisciplinary treatment of acute stroke. There were sessions on acute stroke imaging, acute treatment strategies including endovascular approaches, stroke treatment in difficult circumstances and needs to set up an interdisciplinary stroke center. In the afternoon tutorials were given separately for neurointerventionalists and stroke physicians. Neurointerventionalists had the opportunity for structured hands-on teaching in small groups on endovascular procedures with animal models and management of complications of endovascular treatment. Stroke physicians could learn neuroangiography on a model and they were taught interpretations of CT and MRI by neuroradiologists.

A special highlight for the interventional neurointerventionalists were the hands-on teaching sessions with the animal model. Small groups of 4-5 participants were given the opportunity to perform diagnostic angiography and endovascular treatment procedures such as thrombectomy with multiple devices.

Another highlight was the stroke simulation course: stroke physicians and neurointerventionalists took part in a real-life setting with simulated clinical stroke cases: physicians had to take care of the stroke patient and to decide on acute stroke management. Physicians were observed by colleagues and professionals and received feedback on their performance.

During the Stroke Winter School a faculty meeting was held with members of the ESO, ESMINT and ESNR in order to discuss future common strategies to enhance the quality of stroke management. Main topic was the training of future neurointerventionalists in areas with a current lack of experienced staff.

During the Stroke Winter School participants and faculty had three joint dinners to favor socialization and networking.

The following sponsors contributed to the realization of the Stroke Winter School:

The local organizing committee thanks all the invited speakers for giving time and efforts to the Stroke Winter School, for coming to Bern, and for delivering high quality lectures. Their interest and passion to teach the upcoming generation of stroke physicians and neurointerventionalists was clearly visible.

We are pleased to announce that there will be an 8th ESO ESMINT ESNR Stroke Winter School from 2-5 February 2021 in Bern. 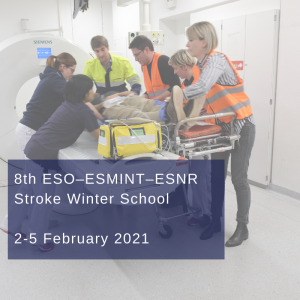