Interview with a Stroke Survivor

Diana Wong Ramos is a 39 year old stroke survivor, whom we met during the SAFE (Stroke Alliance for Europe) Conference in Amsterdam, 6th -9th of December, 2016. Diana is a brave young woman who had recently founded the Stroke Support Organization in Portugal, her Country, (Portugal AVC) together with Antonio Concenicao.

Has your life changed after the stroke?

I was 34 years old it was on June 26, 2011, precisely on my 12th wedding anniversary. If my husband had not immediately realized that I was having a stroke, I would not be here today to see our children grow up! Fortunately, the worst has passed, I have managed to leave the wheelchair, to drive again and to make my life! I had irreversible sequelae in the brain, which in practice translate into hemiparesis of the left upper and lower limbs.

When you had the first symptoms, did you immediately realize what was happening?

“No.” My head ached like never before, I vomited, but I thought it was because of the anesthesia I’d taken four days earlier when I had a surgical procedure for my lumbar hernia. That medical procedure had been scheduled in advance, ran smoothly and I left the hospital after one day, on my own feet.

Did you have any previous knowledge of what stroke is?

I had read so many times about stroke but I never thought it would happen to me! The three warning signs (speech difficulties, drooping face and lack of strength in one arm and leg) were clearly visible, but I did not “want” to see. I suffered a cerebral venous thrombosis with three convulsions, but still, the emergency staff that rescued me at home thought I was just in an anxiety crisis!

For how long were you hospitalized?

I spent the acute phase, during which my life was still in danger, in the Cerebro Vascular Unit of St. Joseph’s Hospital. It was there that I finally realized the importance and the severity of what had happened to me. It was there that I underwent  ANGIO MRI and I realized how insignificant we are before the purposes of God. I spent a lot of time in a hospital bed without even being able to sit up. This experience  made me see that I was reversing priorities in my life.

Recovery is physical but also psychological, has your way of thinking changed a lot?

Yes! I’ve changed a lot! The routine in editing the magazine (I was a journalist / editor in a Portuguese weekly magazine with a great circulation, about 150 thousand copies) was very absorbing and, without that, the days went by, stress accumulated and the family was in the background. It was very hard for my children to see their mother as fragile and debilitated as I was.

However, during the recovery period it happened that you become mother for the third time. Was the pregnancy planned? What was the reaction of the doctors when they heard about it?

My third child, Maria was a blessing, a gift from God! I thought that after the trauma my body had suffered, it would not be possible to be a mother again. But gladly, I was wrong and it happened! Of course it was a high-risk pregnancy, I had to take extra care and specific medication (I took enoxaparin twice a day) but luckily I was followed by a thrombophilia doctor who painted the scene much more positive than my gynecologist.

Did you consider the possibility of interrupting the pregnancy?

I am a mother, I gave my life for my children and I always believed that if pregnancy had happened – after all the suffering that we 4 (me, my husband Celio, and our children David and Magdalene) had passed – it was because everything would run well from there forward! How could I want to abort the fruit of a love as great as ours, which had faced death?

How did you feel during the pregnancy?

Beautifully! I felt as the most special and blessed woman! I did all the exams that my doctors (family, obstetrician, physiatrist and neurologist) advised me and twice a day stung my belly to administer the medicine so the blood did not grow thick.  But I was able to maintain physiotherapy and occupational therapy without problems!

Normal, no epidural anesthesia! My husband was with me all the time, and although I could take anesthesia, I preferred not to take any more “unnecessary risks.”  Of course spasticity did not help at all during contractions, but with the support of my husband and the experience of the obstetrician everything went well.

Meanwhile, the association Portugal AVC emerged. What is it?

It is a non-profit organization, to support stroke survivors, their families, caregivers, and health professionals. Living with stroke sequels may seem like the end of the world, but we’re here to work together to find ways to minimize and manage difficulties, solve problems, and encourage disease prevention.

Why was this association founded?

Although stroke is the leading cause of death in Portugal, and it is the disease that most of the incapacitates people are of working age, there was not until 23 September – when the association was formed – an entity that would care for the particular interests of stroke survivors. We have come to fill that gap! 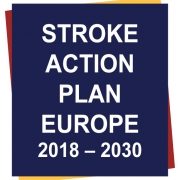