Patient PT has a background history of functional disorder. She also has untreated hypertension and hyperlipidaemia and is an ex-smoker.

She is now referred to the high-risk TIA clinic following a transient neurological attack. This time she was visiting an unwell family member in the hospital. Whilst she was there, she suddenly collapsed onto the hospital bed with loss of consciousness lasting for one minute. When she came around, she had right facial droop and expressive dysphasia lasting for 15 minutes. There was no seizure activity observed. No visual disturbance, vertigo or headache.

MRI brain showed old cerebellar infarcts but there was no acute ischaemia. Echo and 5-day cardiac monitoring was unrevealing. MR angiogram showed no significant stenosis but there was a persistent left trigeminal artery, which served as the principal blood supply to the basilar termination. Bilateral vertebral arteries and the basilar artery below the persistent trigeminal artery junction were extremely hypoplastic.

Maybe she was telling the truth?

Although we did not find any clear evidence of artery-to-artery embolic or cardioembolic sources, owing to the presence of the persistent left trigeminal artery, this episode of complete loss of consciousness and left hemispheric symptoms could potentially be explained by an anterior circulation thrombus causing an atypical “posterior” or “multi-territory” event.

Persistent trigeminal artery (PTA) is a temporary embryonic vascular anastomosis between the carotid and vertebrobasilar arteries. It is uncommon with a reported incidence of 0.1-1.0% and serves mostly as an incidental finding on vascular imaging, with a female sex predilection suggested.1.2 Although very rare, the association of PTA and acute stroke, especially posterior circulation stroke have been reported before.3-4 More interestingly, an apparent “posterior circulation” event could well be related to an “anterior circulation” cause in patients with PTA.

Take home message, in patients presenting with atypical stroke symptoms or when localisations that are otherwise difficult to explain, in addition to foetal posterior cerebral artery, we have got another potential culprit to think of – the persistent trigeminal artery! 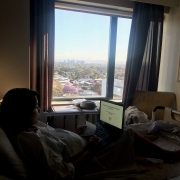