Sneddon syndrome (SS) is a rare disorder (about 4 patients per million), affecting small and medium-sized blood vessels in mainly young females (1). A typical pattern on the skin, concomitant livedo racemosa (LR), a persistent and pathological form of livedo reticularis, which is caused by intimal thickening of the small deep dermal arteries (2), helps to suspect a rare stroke etiology based on a Sneddon syndrome in young women. Salomon Ehramn, Austrian dermatologist already in 1907 very colorfully described this skin phenomena in his work devoted to vascular lesions in syphilis: “a blue slender tree-branching and “forked lighting” pattern that worsens in cool temperature” (4). Pathogenetic explanation for this pattern is that LR develops due to a permanent focal arteriolar obstruction which produces branching net-like pattern and broken circles-hallmarks of racemosa lesion (5). The pathogenesis of Sneddon syndrome itself is unknown, although the detection of anticardiolipin antibodies in 9 to 42% of SS patients suggested a possible overlap with the antiphospholipid antibody syndrome and an immune-mediated pathogenesis (6). Theories on pathology of Sneddon syndrome postulate a primarily thrombotic focus, a cardio-embolic aetiology caused by associated valvular disease or inherited/acquired endothelial dysfunction (5-7).

In Sneddon syndrome the involvement of many organs is observed: it can manifest with signs of ischemic heart disease, myocardial infarction, cardiac murmurs (7), microthrombosis in the systemic flow, including uttering vessels and leading to obstetric complications as well as endarteritis obliterans in the skin and the kidney.

Common neurological manifestations are ischaemic or haemorrhagic stroke, transient ischaemic attack (TIA), cognitive impairment, headache and epilepsy. Boesch et al. described in their study 13 patients with SS and the development of clinical features over 6 years (8). Neurological symptoms included headache, vertigo, dizziness, loss of concentration, memory disturbances, or emotional dysregulation. In 54 % of this study there was a development of TIA with involvement of the middle cerebral artery territory in 84% (8). In Boesch study, an interesting MRI finding was infarcts involving the cortical and subcortical layers, resembling watershed and embolic infarcts.. Tietjen et al. made an observation that LR is common in persons being treated for migraine, and that migraineurs with LR more frequently report a history of stroke than those without LR, showing an odds ratio (OR) of 4.4 [95% confidence interval (CI) 1.4, 13.9] for stroke within the cohort with LR (9). Brain histopathological reports in persons with Sneddon’s syndrome are limited in number but suggest that a similar non-inflammatory endothelial process may underlie vascular lesions in the brain (10). on histpathological examination leukoencephalopathy, multiple cortical infarcts and fibrosis of the intima of the vessels comprising the circle of Willis were also described (11).

In conclusion, examination of the skin is important to detect rare causes of stroke. Sneddon syndrome, sometimes accompanied with LR and/or aPL antibodies, should be considered in cryptogenic stroke patients. 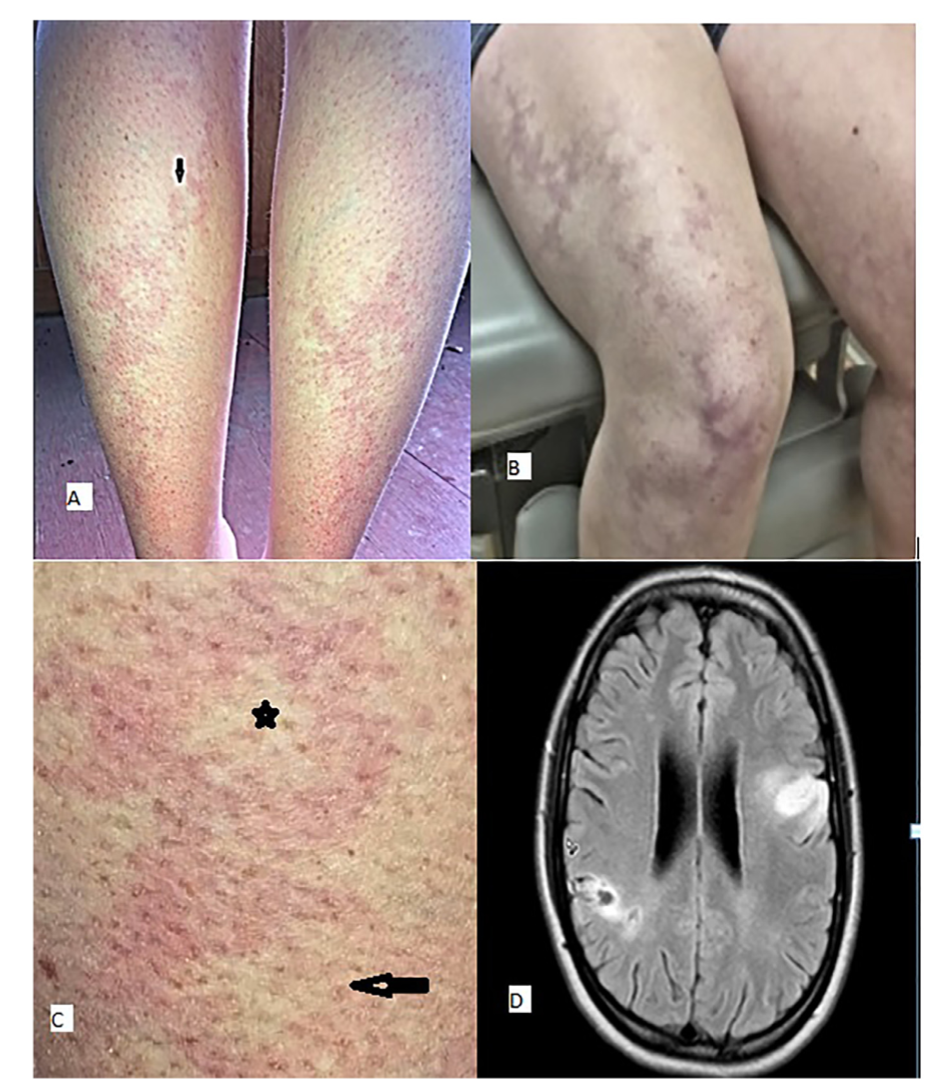 Livedo racemosa. An erythematous tree branching and forked-lightning pattern on the lower extremities.