Stroke is mainly a disease of the elderly. In high-income countries very few stroke cases are aged less than 55 years. Conversely – in south Asia, south-east Asia and parts of Africa – many stroke cases are aged less than 45 years. These parts of the world represent regions where risk of stroke is higher than in many Western high-income countries, therefore adding substantially to the high global burden of stroke. In Sweden and in many other high-income countries, stroke mortality is decreasing, as is the incidence in older persons. Nevertheless, increasing incidence rates especially in the young have been reported from several countries. Part of the reason for this alarming trend could be increasing body weight and obesity rates globally.

Over the last decades, knowledge on etiology of childhood and young adult stroke has made tremendous progress, especially by recognising inflammatory and genetic arteriopathies.
In the end of the last century, the French described the concept of transient focal arteriopathy, which we do now recognise as one of the most frequent etiologies for childhood stroke. The transient focal arteriopathy may be triggered by an infection, following a focal stenosis (most typically at the T junction of the carotid), and it might worsen over the first few weeks, but then spontaneously improve. Especially herpes virus type 1 is linked to arteriopathy in childhood, but other triggers as varicella and many more are known. Once recognised in children, this entity could also be detected in young adults.

Dissection is the most frequent arteriopathy in young adults and the second most in children. The tear in the vessel wall might be triggered by a minimal trauma, but inflammatory vessel changes as well as genetic underlying diseases are involved.
Last but not least, there is a growing list of genetic problems known to predispose to stroke—in children mainly medium to large vessel pathologies—in adults, small-vessel diseases. The best known is Moyamoya leading predominantly to ischemic lesions in children and haemorrhagic lesions in adulthood. The list of monogenetic diseases associated with early-onset stroke is continuously growing. Genetic causes should be suspected if there is a family history of stroke, the presence from steno-occlsuive arteriopathy and aneurysm in the family and if there are vasculopathies in multiple organs. Early recognition of these underlying problems is important: for some there is a treatment option and for others there are specific management issues to consider.

Young stroke: a rare event due to common risk factors or a common disease with rare causes?
Loes Rutten-Jacobs, Germany

Stroke in the young due to illicit drug use
Valerie Wolff, France

During the past decades, the incidence of stroke in the young has increased dramatically. This increase has been described as potentially related to the increasing use of alcohol, tobacco and illicit drugs such as cocaine, amphetamines, heroin and cannabis. In all the cases of drug related strokes there was a temporal association between the drug consumption and the occurrence of neurovascular complications. However, relationship does not mean causality. There are less than 1000 cases reporting neurovascular complications in the young related to illicit drug use. In all these cases, a temporal relationship was described and data support the plausibility of illicit drugs as possible stroke risk factor but the causal association remains unclear.

Long-term prognosis of stroke in the young
Merel Ekker, the Netherlands

Providing young stroke patients with adequate information about there prognosis at the individual patient level remains difficult, but it is obvious that besides a high short-term mortality, the long term risk of mortality and recurrence remains also high. Furthermore, a wide range of post stroke sequelae can occur, like fatigue, symptoms of anxiety, depression as well as sexual and cognitive problems, which should be adressed to be able to help the patients. Ideally, individual prognostic models will be available in the future. 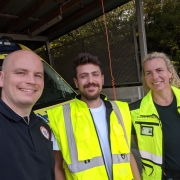