Aneurysmal subarachnoid haemorrhage (aSAH) is a type of stroke with known devastatingly high morbidity and mortality. Early rebleeding before treatment is one of the most feared complications and is associated with poor outcome. Identifying risk factors for rebleeding within 24h after ictus may therefore help to tailor ultra-early aneurysm treatment to those with the highest risk of early rebleeding. Previous studies focused mainly on looking for risk factors associated with clinical presentations, and we also know that the size of the aneurysm influences the risk of rebleeding. However, it is unknown if aneurysm configuration could be another candidate.

In this issue of the ESJ, Koopman and colleagues report the results of a study where the aim was to investigate whether aneurysm irregularity, aspect ratio (length/neck) and bottleneck ratio (width/neck) are independent risk factors for in-hospital rebleeding within 24h after ictus.
Patients with a first ever aSAH admitted to a tertiary referral centre within 24h after ictus were included. Stringent definition of rebleeding was used including both sudden clinical evidence of deterioration and imaging confirmation of increased haemorrhage. In intubated and sedated patients without imaging confirmation, rebleeding was defined as a sudden increase in blood pressure with fresh blood suddenly coming out of the external ventricular drain.
Measurements of aneurysm characteristics were performed by one single rater and included the recording of the length, width and shape of the aneurysm. Aspect ratio and bottleneck ratio were also calculated. Irregularity was considered if blebs, multiple lobes or aneurysm wall protrusions were present.
Of 409 patients included, rebleeding within 24h occurred in 34 (8%) patients. 256 (63%) patients had an irregular aneurysm, which was more commonly seen in those with early rebleeding than those without. In univariable analyses, irregularity, aspect-ratio ≥1.6 and bottleneck ratio ≥1.6 were significantly associated with rebreeding within 24h. Only irregular aneurysm shape remained an independent predictor of rebreeding (HR=3.9, 95%CI 1.3-11.3) after adjustment for various known factors including for age, sex, Prognosis on Admission of Aneurysmal Subarachnoid Haemorrhage (PAASH) score, location of the aneurysm and aneurysm size.

As the authors rightly acknowledged, whilst this is the first study suggesting that irregular aneurysm shape could be a potential independent risk factor for rebreeding within 24h after ictus, two-thirds of the patients without rebleeding also had an irregular aneurysm. Large studies incorporating all potential risk factors are still needed to further develop risk prediction models to determine absolute risks for early rebleeding. 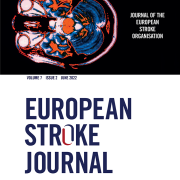 Looking back at ESOC 2021: infection and inflammation in stroke

Cancer-related stroke: When to suspect and how to treat?A Single Continent – overview of brain/heart connection in stroke
Scroll to top