I applied for the 2022 D2D program. With ESO support, I had a chance to spend a three–week Mobile Stroke Unit (MSU) visit in Ipswich, UK. A Mobile Stroke Unit is an ambulance equipped with a computed tomography (CT) scanner, point–of–care blood machines, and telemedicine connection to the hospital. Ipswich is a port town and borough in Suffolk, England, of which it is a county town. It has 39.42 km² and a 133.000 citizen population.

I was welcomed by the whole MSU team, Dr. Silke Walter, Rheanne, Britt Wells, and Rob. They prepared the local guide documents to recommend places I could visit in Ipswich in the following three weeks. Dr. Silke picked me up at the train station and brought me to the homestay. 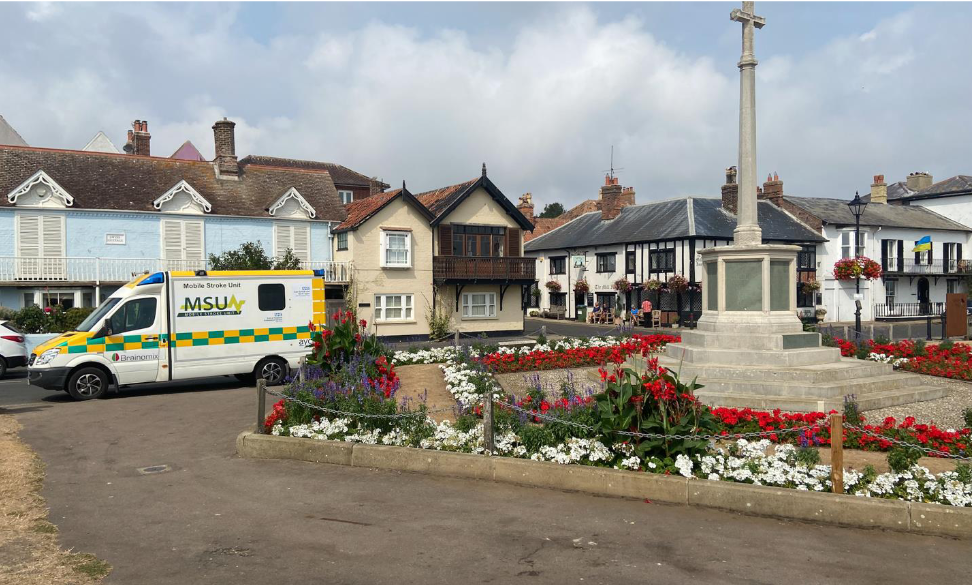 Working in pre–hospital stroke care environment was enlightening and challenging for me. As this was the first time I worked in this field, I tried to prepare carefully so that I have the best performance possible. The emergency system in Ipswich used the Medical Priority Dispatch System (MPDS) to triage patients. On a daily work, we assessed the patients by being the first responders through the MPDS system. In another scenario, we picked up the patient by integrating into the prehospital setting with another ambulance.

The benefit of thrombolysis in the ultra–early window on MSU was demonstrated in urban areas. On the other hand, the MSU team in Ipswich, funded by Saraaland University Germany, examines the benefits of an MSU for patients with suspected stroke living in rural areas. There was an advanced CT scanner onboard in combination with much–advanced equipment, which allowed us to diagnose patients with stroke–mimicking diseases. Many patients benefit from such a system excluding or confirming stroke diagnoses. After that, they received medications, stayed at home, and booked the following medical appointment with a general practitioner (GP) or TIA clinic. Other patients were directed to transfer to the stroke ward after completing the diagnosis, bypassing the emergency room. This reduced the workload and the stress on the emergency department, which was often overloaded. We have the opportunity to discussed the symptoms, the imaging, and the diagnosis for every single case.

Before starting the day, we examined the CT–Scanner and set up all of the machines in the MSU, daily checking, and calibration of many devices in the MSU. I also had opportunities to discuss the latest science with experts in the stroke field, how to triage stroke patients in the pre–hospital settings, how to predict large vessel occlusion stroke, as well as the future of acute stroke care. Dr. Silke Walter also invited me to review a scientific paper.

After that, I discussed my next project with her and received much valuable advice, for example how to do it, the way to get funding, and the way to develop the project. After working, we hang out together in pubs and hubs, Dr. Silke also invited me to a barbecue party in her home. She brought me around in the countryside, visited the castle, and many beautiful landscapes around Ipswich.

Overall, three weeks onboard on MSU helped me to get new insights about MSU, and how to set up, run and operate an MSU. In the future, I hope I can do something to improve the very important pre–hospital stroke care, especially in developing countries like Vietnam. I also had great experiences in the UK with many kind people. That was a lovely trip!

The Department to Department Visit Programme aims to provide insight into stroke departments outside the applicant`s home country through a grant of EUR 1,500 offered to up to 10 young physicians and researchers to support a short visit of a week or as a contribution to a longer visit to an European department or laboratory.

What do we know from RCTs of endovascular therapy in the late time window and... Scroll to top