Contrast-induced encephalopathy (CIE) is a rare complication of iodinated contrast administration during endovascular treatments, with a described incidence of less than 2% (1,2). CIE most commonly presents as an encephalopathy, ranging from mild confusion to decreased consciousness, with or without focal neurological deficits, including cortical blindness, motor or sensory deficit, aphasia, as well as headache and/or epileptic seizures (3-6). Symptoms may start during neurovascular treatment, immediately after or a few hours afterwards and usually progress over several hours (4, 5). The first case description goes back to 1970, with a report of a woman who experienced transient cortical blindness after a coronary angiogram (7). Over the last few years, CIE is becoming a more and more relevant neurological clinical entity and, with the expanded use of contrast-based diagnostic imaging and endovascular treatments in acute ischaemic stroke, its incidence is expected to increase.

The exact pathophysiology of CIE is not well understood, but temporary disruption of the blood-brain barrier is thought to give way to possible neurotoxic effects of contrast agents. Identified CIE risk factors include patient characteristics, as hypertension, diabetes mellitus, chronic kidney disease and prior stroke (1,3,8), as well as contrast- and treatment-related factors, like higher contrast volume, hyperosmolar-/ionic contrast agents and intra-arterial administration of iodinated contrast (1).

Diagnosis is often challenging because of the heterogeneous symptoms and radiographic features, which are non-specific. Indeed, CIE symptoms closely mimic other causes of neurological deterioration after neurovascular treatment, such as intracerebral haemorrhage (ICH), recurrent ischaemic stroke, posterior reversible encephalopathy syndrome (PRES), post stroke seizures or post-ictal phase, residual sedation, metabolic disturbances such as hypoglycaemia or delirium. Therefore, CIE entity is a diagnosis by exclusion. Neuro-imaging is a pivotal step for helping differential diagnosis, especially for identifying ICH, recurrent ischaemic stroke and PRES. Brain CT features of CIE include parenchymal oedema with loss of grey-white matter differentiation and/or effacement of cortical sulci and contrast enhancement of cortex or subarachnoid space, mostly in the hemisphere of contrast administration, but not limited to a vascular territory. Accordingly, brain MRI may show T2 hyper-intense cortical lesions and new lesions with diffusion restriction not limited to the affected vascular territory (1-4). However, both CT and MRI may also appear normal, especially in the early phase (1,4).

At this moment, there is no standard treatment of CIE. Usually, vigorous hydration is recommended. The efficacy of steroids and mannitol in reducing cerebral oedema remains controversial, and these drugs are not routinely recommended (1,4). When seizures occur, anticonvulsive drugs should be introduced. Importantly, when CIE is a likely diagnosis, the use of additional contrast-based imaging should be very carefully considered. Indeed, CIE has been previously regarded as a transient and benign complication of contrast-administration, characterised by a complete resolution within one to three days, questioning the benefit of specific treatments. However, recent publications on CIE occurrence after neurovascular procedures, reported an association between CIE and poor functional outcome at three months, without impact on mortality-risk (3). In particular, a meta-analysis published in 2021 showed that 15% of patients required mechanical ventilation because of decreased consciousness, and one in ten patients did not completely recover (4).

In conclusion, CIE is a relevant neurological entity that clinicians should not underestimate. Because of the heterogeneous spectrum of clinical signs, it remains a challenging diagnosis. However, when a patient neurologically deteriorates after intravenous or intra-arterial iodinated contrast agents use, we suggest including CIE systematically in the differential diagnosis. Of note, its occurrence might not be as benign as often described and more research is needed to clarify its impact on clinical outcome.

ESOC is Europe’s leading forum for advances in research and clinical care of patients with cerebrovascular diseases. ESOC 2023 will live up to its expectation, and present to you a packed, high quality scientific programme including major clinical trials, state-of-the-art seminars, educational workshops, scientific communications of the latest research, and debates about current controversies. 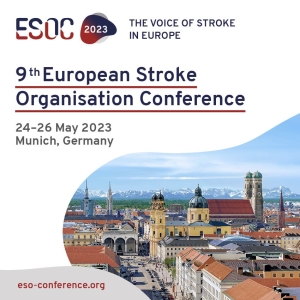 Registrations will open in November 2023 for ESOC 2023. Learn more here.