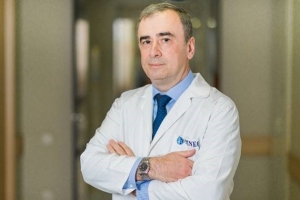 After obtaining the Honor Diploma of Medical Doctor from Tbilisi State Medical University, Alexander Tsiskaridze started his professional career in late 80ies at Sarajishvili Institute of Neurology in the capacity of Intern, then Junior Scientific Researcher. In the 1999-2000 he has undertaken European Neurological Society Fellowship in Centre Hospitalier Universitaire Vaudois, Lausanne, Switzerland. Later he gained Swiss National Science Foundation Research Grant and Fellowship at the Department of Neurology of the same university hospital (2003-2004). In Georgia he continued his career in Sarajishvili Institute of Neurology as Senior Scientific Researcher, Head of Research Department and finally held the position of Scientific Director. He became Professor of Neurology in Ivane Javakhishvili Tbilisi State University in 2006. He also served as the Dean of the Faculty of Medicine (2006-2017) and the Vice Rector for Research (2017-2019) in the same university.

Dr. Tsiskaridze is the author of 54 scientific papers. He is also the author and co-author of several book chapters as well as co-editor of the book “Treatment-related stroke: including iatrogenic and in-hospital strokes” (Cambridge University Press). He has received numerous international and local degrees, awards and honors including the degree of Candidate of Medical Sciences (PhD), the degree of Doctor of Medical Sciences, Sarajishvili Medal and Honor Diploma for Achievements in Neurological Research of Georgian Association of Neurologist and Neurosurgeons, Young Investigator’s Award of the European Stroke Council, Bruce Schoenberg International Award in Neuroepidemiology of the American Academy of Neurology, Georgian National Scientific Prize and Silver Medal for the Cycle of Papers on Cerebrovascular Disorders, Ivane Javakhishvili Medal of Tbilisi State University and Order of Merit of President of Georgia.