Author and affiliations: Dr. Melinda B. Roaldsen UiT, The Arctic University of Norway, Department of Clinical Medicine and The Neurological Department at the University Hospital of North Norway, Tromsø, Norway

Approximately 1 in 5 acute ischaemic strokes occur during sleep.1-3 We know that clotbusting treatment with alteplase given within 4,5 hours of symptom onset improves clinical outcome4,5. However, patients who wakeup with their symptoms are not candidates for this treatment because we don’t know time of stroke onset,. There are studies that show that the time of stroke onset is often close to awakening,6,7. The finding that wake-up stroke patients share clinical and radiological findings with patients with a stroke duration under 4,5 hours also supports this.8-11 It is therefore possible that also wake-up stroke patients might benefit from clotbusting treatment.

Positive results for endovascular thrombectomy treatment of wake-up stroke patients with effect up to 24 hours were presented at the 3rd ESOC 2017 in Prague from the DAWN trial17. It is important that patients are aware of the fact that it is common to get a stroke while sleeping, and for emergency services to consider to routinely transport patients to specialised health care centres and hospitals with neurological expertise so that patients with wake-up stroke may receive the best possible treatment.

Health care workers and the public at large have to be aware of this exciting current development; both the possibility of endovascular treatment for wake-up stroke and also that there are several on-going trials testing thrombolytic treatment in patients with wake-up strokes which they may be included in and benefit from.

When the results from these trials are presented hopefully we might be able to answer the question of which treatments are safe and effective for wake-up stroke patients. We also might be able to say more about which patients should be treated with each of the different treatment modalities that exist for a best possible clinical outcome. We encourage patients that wake up with newly acquired stroke symptoms to call their local emergency services so that they can be advised and guided regarding the local existing treatment options in their area.

If presented with the choice to become a part of a clinical trial please be advised that this is always a highly personal decision. Please make sure to talk it thoroughly through with your doctor, family and friends if possible before making your final decision. 18

Disclosure: The author is the International Trial Manager for the TWIST (Tenecteplase in Wake-up Ischaemic Stroke) Trial.

ESO Blog and YSPR Corner 2019: Keep Calm and Carry On 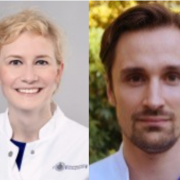 Patients and carers expertise important for the credibility of the European...4th European Stroke Science Workshop / 16 – 18 November 2017 / Garmisch-Partenkirchen,...
Scroll to top