Multimorbidity is common in stroke patients and is associated with mortality and poor functional outcome. However, and in spite of its impact on the clinical and economic burden of ischemic stroke, it has received little attention so far.

In this ESJ paper, the authors provide a detailed description of the prevalence and clustering of individual conditions in pre-stroke functionally independent patients from the Swedish Stroke Register (RisksStroke) and assess mortality and functional outcome in relation to age and comorbidity burden.

Patient surveys were conducted at 3 months, 12 months, 3 years and 5 years after stroke. Additional data were collected from the Swedish National Patient Register, the Swedish Causes of Death register and the Swedish Prescribed Drugs Register. The Charlson Comorbidity Index was used to guide the selection of pre-stroke comorbid conditions.

This study included 11775 functionally independent adult patients with first-ever ischaemic stroke registered in RisksStroke between 2011 and 2013. Comorbidity burden was defined as the sum of individual conditions and grouped as none (0), low (1), moderate (2-3) and high (³4). Multivariate analyses were used to estimate the prognostic significance of individual conditions and co-occurrence was assessed using hierarchical cluster analysis.

There was a large cluster of cardiovascular conditions (angina, chronic kidney failure, heart failure, myocardial infarction and peripheral vascular disease) containing several sub-clusters; Hypertension and diabetes formed a separate vascular/metabolic cluster. The authors also selected and analysed 7 conditions individually, based on their clinical relevance and limited correlation to other included conditions. Dementia, chronic kidney failure and heart failure were the strongest predictors of poor outcome at 3-month follow-up, while hypertension, COPD and malignancy showed no association.

These results call attention to the importance of including comorbidity as a key component of personalised medicine. A better integration of multimorbidity in guidelines and in the overall organisation of healthcare systems could be a fundamental contribution to the implementation of a more patient-centred approach.

The original article “Long-term outcome after ischemic stroke in relation to comorbidity – An observational study from the Swedish Stroke Register (Riksstroke)” is available in the Online First section of the European Stroke Journal. 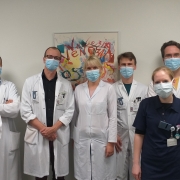 Stroke Care in Ukraine: Press conference held in advance of WSD2019ESO Committee Positions Open from May 2020
Scroll to top