Vertebro-basilar territory ischaemic strokes account for about 20% of all ischaemic strokes. In 8% of these cases, basilar artery (BA) is occluded, and a prompt diagnosis has crucial therapeutic and prognostic implications (1,2,3). We report here a clinical case of an uncommon diagnostic pitfall of BA occlusion.

This is a 68-year old patient, with a clinical history of arterial hypertension, hypercholesterolemia, smoking, myocardial infarction and chronic kidney failure. He also had previous history of right middle cerebral artery territory stroke due to an atheromatous stenosis of the ipsilateral internal carotid artery, treated with thrombo-endarterectomy. His usual medication includes clopidogrel, atorvastatin and an angiotensin-converting-enzyme inhibitor. The patient was referred to the emergency department 6 hours after a sudden onset of vertigo followed by a fall at home. The initial neurological examination showed gaze-evoked nystagmus, gait imbalance and right upper-limb ataxia. The National Institute of Health Stroke Scale (NIHSS) was 2. Brain magnetic resonance imaging (MRI) was performed at the emergency department (see Figure1). 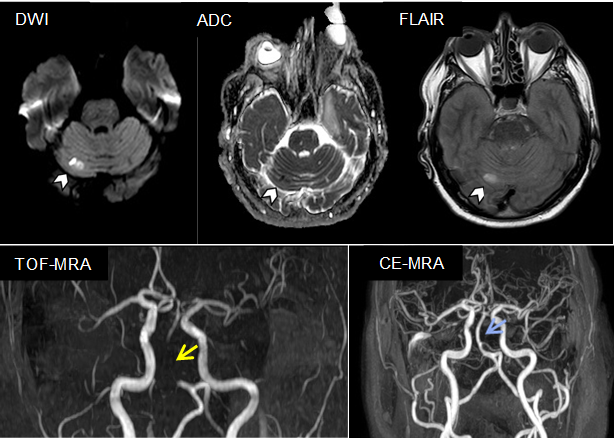 The brain MRI showed acute ischaemia in the right superior cerebellar artery territory. Vascular sequences showed discrepancy between TOF-MRA, in which we found a signal void in the BA, and CE-MRA (acquired about 25 minutes later), where the BA appeared permeable and without indirect signs of stenosis. The hypothesis of spontaneous recanalization during MRI acquisition was considered. Double antiplatelet therapy was initiated, and the patient underwent the vascular diagnostic work-up in our stroke unit. The cervical and transcranial Doppler ultrasound revealed a permanent subclavian-vertebral steal syndrome (SSS) with blood flow reversal in the left vertebral artery and BA associated with a 70% left pre-vertebral subclavian artery stenosis.

SSS is a hemodynamic phenomenon of blood flow reversal in the vertebral artery, usually secondary to an atheromatous stenosis of the prevertebral subclavian artery (4). Retrograde blood flow in BA may be present in about 20% of cases (5).

In the case of our patient, the blood flow reversal in BA lead to a flow void on the TOF-MRA, mimicking BA occlusion. Indeed, because flow is a major factor in TOF imaging, lack of signal suggests that flow is either absent or retrograde. Accordingly, CE-MRA did not shown any intracranial vessel abnormality. A few similar cases of pseudo-occlusion of vertebral artery on TOF-MRA, secondary to SSS, have been previously described (6).